We were a bit late. It was supposed to be on November 20th. But maybe it’s always a bit too late.

‘YX’ came up with this idea. We thought it will take us two hours or so to write down the names. We stayed late in the office, mechanically writing down more and more names. Nobody expected that many. More and more with every year.

Black spots on my fingers, because I always have to get messy when I write with a marker. ‘A’ got a bloody bruise on her finger.

All the black markers stopped writing. Any kind of music was somehow too sad. 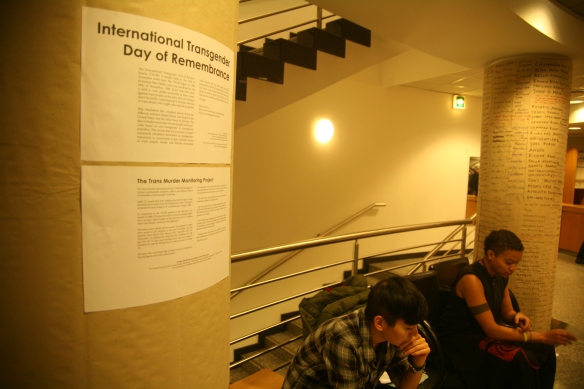 I was reading  the names out loud. Knowing Spanish helped, because many victims were from Latin America. My voice wasn’t shaking, but with every new page it was harder. When I finished and looked up everybody’s eyes were wet. 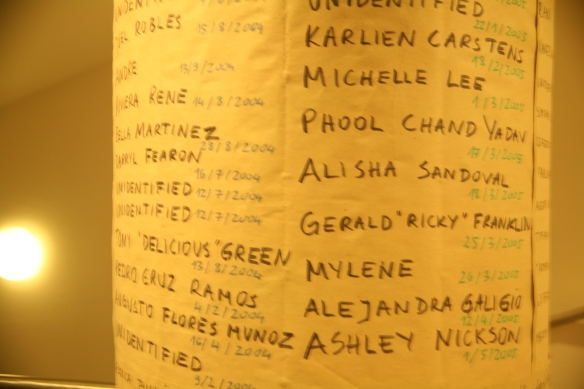 you wanna be peter pan.
you wanna be that fairy-dusted disaster that conquers hook and slays pirates because that’s what strong boys do.
but they gave you… a dress, and a name to match, and a lot of pink stuff you’d never play with.
you loved action figures just as much as dolls (yeah you love dolls, don’t lie)
you don’t walk like a lady though.
you flunked ballet class.
you can’t go, it’s boys only,
don’t wear swimming trunks wear a bathing suit
you’re too old to be a tomboy GROW UP.
you can’t fly, you never will.
even days when you’re wearing the perfect clothes
people will stare and say “is that a girl or a boy?”
and you smile to yourself because today,
maybe you might just pass,
but then you see their eyes register no facial hair,
no knot in your throat, no bulge in your pants, they say it again. louder, tauntingly, “IS THAT A GIRL OR A BOY?”
this time they know and they just wanna see you squirm
and you do and they snicker and give you that look that says, “you aren’t human here.”
you’re stuck with the body you’ve got and the gender you don’t
there’s no fairy dust
no flying away
no childhood dreams
so you’re doing the best you can.
you rock your indecisive parts proudly,
but there are days when you can be shattered by a quick tongue,
days when men argue about the lines of your body and then one says, “it’s got tits.”
IT,
because you’re not worthy of any other title.
days when girls will hate you for what you are
whatever you are
you aren’t human here.
but i’ve got tits.
so on that day when he said to me,
“i don’t care if you’re gay i’d still fuck the shit out of you”
i should’ve been willing, right?
but i wasn’t,
so i walked faster trying to escape his leering face,
the look of malice in his eyes that i’ve seen in so many other men
“i’ll fuck you straight, girl.”
i don’t know how much of a girl
i am but at that moment i wished i had the knuckle strength of men…
but i don’t so i left my pride in this throat,
i would try to glue myself back together for tomorrow
because there are always gonna be days like this.
days when you have to carry your somber heart like a coffin,
days when you pass until you slip and let your words fall from your mouth carried by a feminine voice and they know again.
know that you’re not a him, or a her, but something in between, not human to them.
what an abomination. what a monster.
why can’t you be normal with your dress, your boyfriend, your virginity?
they wanna paint you the color of smashed hymens.
they want you to know that naked, you will always be soft like a woman;
naked, you will always have the parts of a woman,
you, IT, your telltale breasts
you will NEVER be one of those strong boys.
you are far from peter pan but learn to hold your back like a flagpole,
it’s all you’ve got out there.
there’s no neverland.

How to Make Love to a Trans Person
by Gabe Moses

Forget the images you’ve learned to attach
To words like cock and clit,
Chest and breasts.
Break those words open
Like a paramedic cracking ribs
To pump blood through a failing heart.
Push your hands inside.
Get them messy.
Scratch new definitions on the bones.

Get rid of the old words altogether.
Make up new words.
Call it a click or a ditto.
Call it the sound he makes
When you brush your hand against it through his jeans,
When you can hear his heart knocking on the back of his teeth
And every cell in his body is breathing.
Make the arch of her back a language
Name the hollows of each of her vertebrae
When they catch pools of sweat
Like rainwater in a row of paper cups
Align your teeth with this alphabet of her spine
So every word is weighted with the salt of her.

When you peel layers of clothing from his skin
Do not act as though you are changing dressings on a trauma patient
Even though it’s highly likely that you are.
Do not ask if she’s “had the surgery.”
Do not tell him that the needlepoint bruises on his thighs look like they hurt
If you are being offered a body
That has already been laid upon an altar of surgical steel
A sacrifice to whatever gods govern bodies
That come with some assembly required
Whatever you do,
Do not say that the carefully sculpted landscape
Bordered by rocky ridges of scar tissue
Looks almost natural.

If she offers you breastbone
Aching to carve soft fruit from its branches
Though there may be more tissue in the lining of her bra
Than the flesh that rises to meet itLet her ripen in your hands.
Imagine if she’d lost those swells to cancer,
Diabetes,
A car accident instead of an accident of genetics
Would you think of her as less a woman then?
Then think of her as no less one now.

If he offers you a thumb-sized sprout of muscle
Reaching toward you when you kiss him
Like it wants to go deep enough inside you
To scratch his name on the bottom of your heart
Hold it as if it can-
In your hand, in your mouth
Inside the nest of your pelvic bones.
Though his skin may hardly do more than brush yours,
You will feel him deeper than you think.

Realize that bodies are only a fraction of who we are
They’re just oddly-shaped vessels for hearts
And honestly, they can barely contain us
We strain at their seams with every breath we take
We are all pulse and sweat,
Tissue and nerve ending
We are programmed to grope and fumble until we get it right.
Bodies have been learning each other forever.
It’s what bodies do.
They are grab bags of parts
And half the fun is figuring out
All the different ways we can fit them together;
All the different uses for hipbones and hands,
Tongues and teeth;
All the ways to car-crash our bodies beautiful.
But we could never forget how to use our hearts
Even if we tried.
That’s the important part.
Don’t worry about the bodies.
They’ve got this.

The International Transgender Day of Remembrance (TDOR) is usually held on the 20th of November every year. The TDOR began in 1999 to honour Rita Hester, who was murdered on the 28th of November, 1998. Every year, this event is held to raise public awareness about hate crimes against trans people, at the same time providing a space for public mourning and to honour the lives of trans people who might otherwise be forgotten.