I was just in middle of writing an essay on transbiology, when I saw an article on a genetically modified sheep, whose fat is supposed to be beneficial for people with cardiovascular diseases. 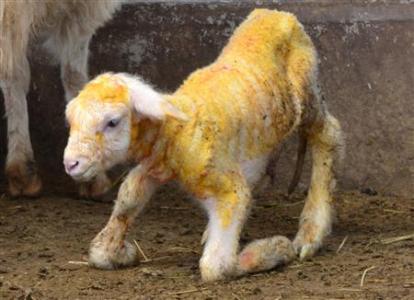 What struck me most about this news is that instead of getting the “good” type of fat from nuts, seeds and leafy greens, the scientists from the Beijing Genomics Institute (BGI), the Institute of Genetics and Developmental Biology at the Chinese Academy of Sciences, Shihezi University in Xinjiang and the Chinese government decided to invest lots of money in a complex process of producing a transgenic animal. In the meantime, meat consumption is one of the major environmental threats. Recently China has become the leader in world’s meat consumption, leaving the U.S far behind.

More than a quarter of all the meat produced worldwide is now eaten in China, and the country’s 1.35 billion people are hungry for more. (…) Altogether, China harvested the largest grain crop of any country in history in 2011. A full one third of that harvest is going to feed animals to meet the growing demand for meat, milk, eggs, and farmed fish.

Of course, here I have to warn against demonizing China as a global polluter, that often happens in the environmentalism discourses, especially those coming from the West. The U.S. remains the unquestioned leader in GM crops production. Last year AquaBounty, an American biotechnological company, patented a genetically modified Atlantic salmon, owning an animal as a product.

AquAdvantage® Salmon (AAS) include a gene from the Chinook salmon, which provides the fish with the potential to grow to market size in half the time of conventional salmon. In all other respects, AAS are identical to other Atlantic salmon.

The trademark on a breed of animals, promising an “advantage” (probably mostly to the producers) seems a very perverse idea. But the question remains: why bother with a lengthy and difficult process of inserting a gene linked to the production of polyunsaturated fatty acids into a donor cell taken from the ear of a Chinese Merino sheep, then inserting the cell into an unfertilized egg and implanting it into the womb of a surrogate sheep? Human health. That seems to be an answer of the scientists. Well, guess what, why not turning vegetarian/vegan, or just simply introduce more leafy greens and nuts into your diet? Instead, the greens will be consumed by a transgenic sheep, so that consumers can enjoy their terribly expensive lamb steak from Peng®Peng©BetterFuture, assuring themselves that the more they eat, the healthier they get. Capitalism in a romance with science.

This reminds me of Eduardo Kac’s controversial transgenic artwork, the GFP Bunny. In 2000 Kac created Alba, a green glowing rabbit, with a florescent gene found in the jellyfish Aequorea Victoria implanted in her. It might seem that this kind of art project is meaningless and problematic. However, the artist is mostly interested not in the embodied existence of a green chimerical rabbit, but in the process of its social integration, and the debates that it created. He writes:

As a transgenic artist, I am not interested in the creation of genetic objects, but on the invention of transgenic social subjects. In other words, what is important is the completely integrated process of creating the bunny, bringing her to society at large, and providing her with a loving, caring, and nurturing environment in which she can grow safe and healthy. This integrated process is important because it places genetic engineering in a social context in which the relationship between the private and the public spheres are negotiated. In other words, biotechnology, the private realm of family life, and the social domain of public opinion are discussed in relation to one another. Transgenic art is not about the crafting of genetic objets d’art, either inert or imbued with vitality.

In this sense, Kac’s art points to the problem of lack of responsibility in creating transgenic organisms. The low-fat sheep seems to be a perfect example of that. Please don’t get me wrong — I am not against the transgenic animals, in fact I think that hybrids surround us whether we like it or not and following Bruno Latour, I believe that modernity is all about proliferation of natureculture hybrids. What does the Chinese sheep teach us about human relations to animals and to nature? In my view the painfully anthropocentric approach revealed in producing a living being just for the betterment of human health. 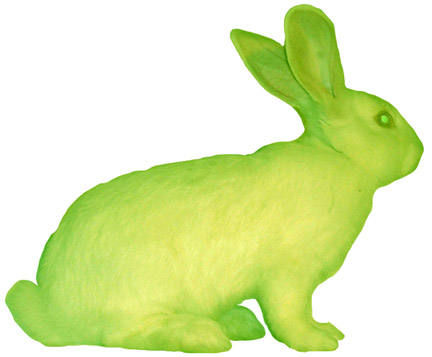 The new cloned celebrity called Peng Peng is a close relative of Dolly, the infamous British sheep. Sarah Franklin in her book Dolly Mixtures “tries to situate her [Dolly’s] emergence as part of the history of agricultural innovation and its close connection to life sciences – in particular reproductive biomedicine.”[1] Digging in Dolly’s genealogy and rich significance of her existence to the politics, medicine, ethics and economics, Franklin manages to reveal the historical trajectory that made the sheep a biosocial entity, queering the notions of the biological, the cultural, the technological and the political. With the new form of reproduction (trangenesis) Dolly still belongs to the long history of animal husbandry, control over their bodies and reproduction, and even imperial expansion. Franklin writes: “because Dolly’s assisted creation out of technologically altered cells confirms the viability of new forms of coming into being, or procreation, her existence can be seen to redefine the limits of the biological, with implications for how both sex and reproduction are understood and practiced.”[2] What she calls “remixing of sex” shows how transbiological imaginary thoroughly affects reproduction, sex, and sexuality. Later in the book, she even mentions how cloning is associated with the fear of same-sex reproduction.[3] She draws on Jackie Stacey’s analysis of science-fiction cinema featuring new genetics. Stacey noticed: “The reproduction of sameness through sexual difference is no longer so straightforward when the means for assuring its continuity are new technologies of replication that trouble the authority of paternity, inheritance, and heterosexuality in the cultural imagination.”[4]

Just as Dolly mobilized the British biotechnological industry, bridging it with the long history of wool production, export of animals to the new world, colonization and the Australian outback, Peng Peng’s location is crucial. She was conceived in a laboratory  in Shenzhen in southern China, in one of the biggest Special Economic Zones (SEZs), where free market ideology flourishes and huge amounts of goods consumed in a global  market are produced at the expense of cheap labour.